After preparing the nucleus two days ago last Monday, it was time to introduce the new queen today to her new colony at Santropol Roulant’s McGill apiary. The queen arrived yesterday in a plastic cagette shaped like a lowercase letter “D” within a larger plastic cagette (see photo below). The stem of the “D” holds a candy plug, which the worker bees will eventually eat through to let the queen bee out of her cage. The purpose of the candy plug is to delay the queen’s release and thus enhance her chance of acceptance. The worker bees need to get used to the new queen’s pheromones and accept her, or else they think she is an intruder and possibly attack her. 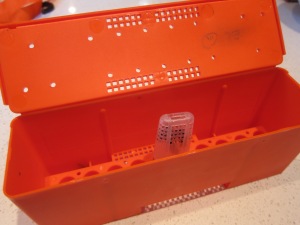 She was accompanied by three attendant worker bees, who help to groom her, feed her and keep her warm while she is in transit. You can see them fussing about her here in this photo. 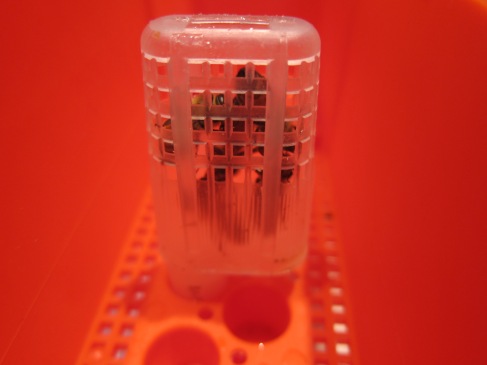 Once they arrive, the queen and her attendants have to be properly cared for and placed in the colony as soon as possible. Since the cage contained candy and attendant bees, they were kept in a warm and dark place in my apartment. They can be kept like this for up to one week given they are fed a drop of sugar water twice per day.

The queen has a small red dot on her back, indicating that she was born this year (red means that the queen was born in years ending in 3 or 8, and other colors mean different years). The red dot also helps us to identify her when she is in the hive surrounded by buzzing worker bees.

So, Tim and I slowly introduced the new queen by placing the cagette in the top super between some sticky frames. Instantly, some of the worker bees covered the cagette to get a closer look at their new queen (see photo below). When introducing a new queen, you are supposed to pay attention to how the other bees react to her. If the bees cluster over the cagette and appear to by trying to bit or otherwise injure her, then they might not be very happy about a new queen. On the other hand, if the bees form a loose cluster and try to feed or lick her, they are more ready to accept her. Either way, the candy plug gives the bees over a week to get used to their new queen. 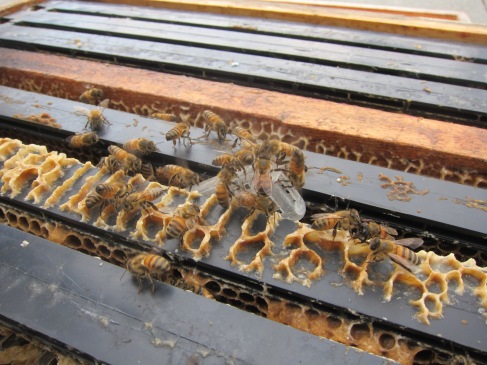 After introducing the queen, we shook a few bees from one of the honey supers below to give the queen more potential subjects. We tried to brush them in (which they really do not like), but they were more amenable to being shaken in.

There were not too many bee casualties and no stings, so Tim and I deemed the intervention a success.

Check back on this blog to find out if the colony has officially accepted its new queen. We should know in about ten days.